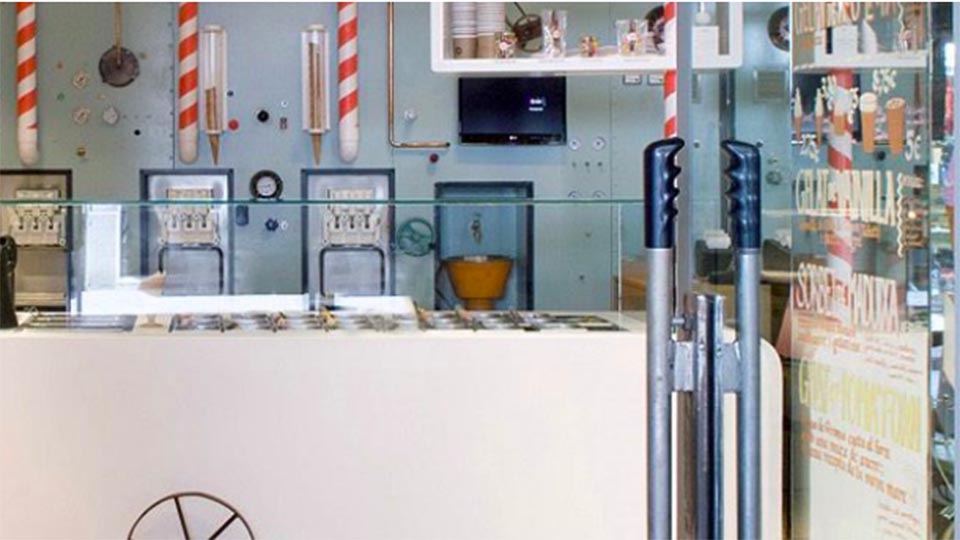 When passing by El Liceu, you will notice a strange sight. It looks like a fairy-tale food truck attached to a network of candy cane tubes – more worthy of a scene from Charlie and the Chocolate Factory than something at home of Barcelona’s famous opera house.

Welcome to Rocambolesc – ice-cream invented by Jordi Roca, pastry and dessert chef of the Michelin spangled restaurant El Cellar de Can Roca in Girona. This particular Roca (three siblings make up the über famous team) has been pushing the boundaries of our sweet tooths for quite some time. He first hit headlines with a dessert called ‘El Gol de Messi’ (an edible pitch with a football made of ice-cream) and desserts flavoured with the world’s most iconic perfumes. His creativity and wicked sense of humour is legendary within gastronomic circles – and have reached a peak with Rocamobolesc – an ice cream truck from la la land.

Barcelona’s Rocambolesc (there are two others in Girona and Platja d’ Aro, both on the Costa Brava) is the opening act for Opera Samfaina, a new project that aims to attract visitors to El Liceu with a range of food stands that celebrate Catalan gastronomy. To mark the occasion, Roca, with the help of a 3D printer, invented a popsicle in the delectable form of Andrés Velencoso – the top Spanish model (he comes in a flavour of milk, cinnamon and coconut). There are also ice-creams in the shape of Columbus’s finger (the one pointing to the New World on the monument at the port end of La Rambla) and Jordi Roca’s own nose – a generous snout flavoured with rose water.Regular flavours include baked apple, lemon, green apple and mint, or mango and lavender, which you can buy in a cone, or as a topping on a pant (a slice of brioche).

Inventive, fun, delicious and Michelin credentials to boot – Rocambolesc has bowled us over at DestinationBCN.